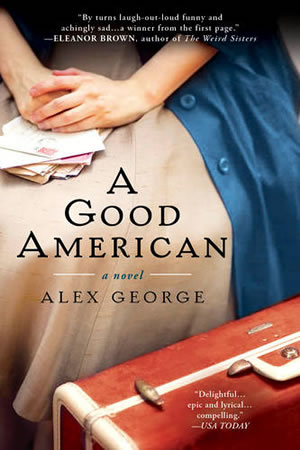 A Good American is a story of immigrant hope.

Set in a fictional Midwestern town and spanning more than a century, the novel tells the story of three generations of the Meisenheimer family. Beginning with an improbable love affair ignited by the power of song, the story follows an unorthodox young couple as they flee to America in search of a new life together. Their new home, Beatrice, Missouri, is filled with unforgettable characters: a jazz trumpeter from the Big Easy who cooks a mean gumbo, a teenage boy trapped in the body of a giant, a pretty schoolteacher who teaches more than just music, a minister who believes he has witnessed the second coming of Christ, and a malevolent, bicycle-riding dwarf.

From bare-knuckle prizefighting and Prohibition to sweet barbershop harmonies and the Kennedy assassination, and beyond, the family is caught up in the sweep of history. Each new generation discovers afresh what it means to be an American, and in the process they sometimes finds out more about themselves than they had bargained for.

Poignant, funny, and heartbreaking, A Good American is a novel about being an outsider – in your country, in your hometown, and sometimes in your own family. It is a universal story about the families we create and places we call home.

Click here to see what booksellers, authors, and the media are saying about A Good American.

Cheaper Than Therapy: In 2013, filmmakers Viktorija Mickute and Varvara Fomina made a short film about the writing of A Good American. Watch it below.