Family traditions can be pernicious things.  Bizarre rituals – whose precise genesis nobody can quite remember – are dutifully repeated year after year, simply because that’s what’s always been done.  Quite often nobody is having much of a good time, but nobody is willing to admit it.

Of course, it doesn’t have to be like that.  This weekend saw my wife’s cousin Connie’s annual hayride and creek wallow. 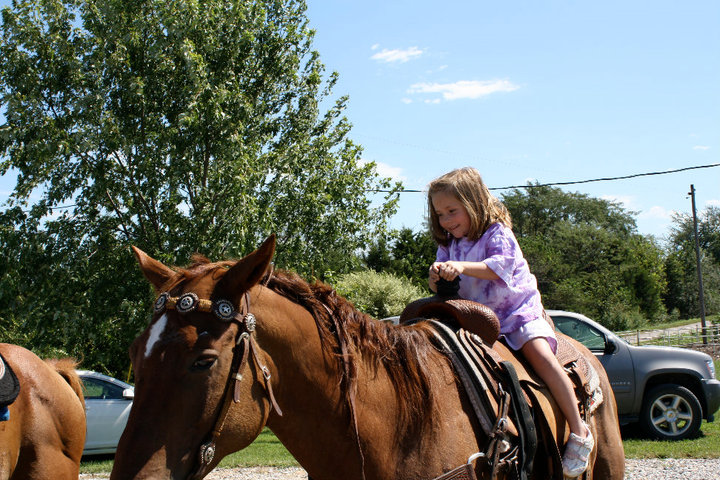 When we arrived at Connie’s farm there were all sorts of horses strolling about.  This branch of the family has always owned horses, but since the four of us are still recovering from the domestic trauma of adding a guinea pig to our household, the sight of these beautiful beasts immediately made us a little anxious.  (Christina’s cousin Jennifer remarked that she didn’t like any animal bigger than she was, and she makes a good point.)  While the rest of us took a discreet step backwards, Catherine immediately declared that she wanted to ride one.  Moments later she was sitting in the saddle, her little legs clinging on for dear life but otherwise looking pretty pleased with herself.  I watched her, thinking that it wouldn’t hurt to be slightly more afraid.  Ah well.  She’s only five.  Still plenty of time for her to turn the rest of my hair grey.

The plan was that we would ride down to a nearby creek, where the children would play in the water while the grown-ups drank beer and cooked hotdogs on an open fire.  Transport was provided by a posse of horses, somebody’s truck pulling a long trailer, a old buggy pulled by two donkeys, and a small convoy of fun-looking four wheelers.  There were probably about forty people, all in all.  Rather to my surprise, Christina volunteered to go in the donkey-drawn buggy.  The closest she’d been to a pair of mules prior to that was in the shoe department at Bergdorf Goodman.  (It’s comedy gold, I tell ya.) 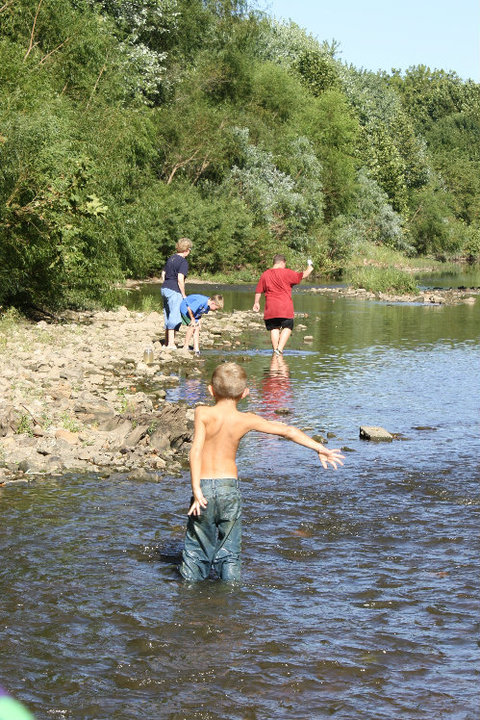 Who needs a swimsuit?

Off we finally went, enjoying the perfect afternoon sunshine, and looking about us as we trundled through the gravel back roads of Moniteau County.  And trundled.  And trundled.  It soon became apparent that the hay ride was a more significant component of the day than we had originally understood.  When we realized this, and stopped wondering when we were going to arrive at our destination, we began to enjoy the journey.  Missouri Zen.  Terrifying.  (Christina also reports that her enjoyment of the ride improved significantly when she discovered she was sitting on a cooler of beer.)

We nearly didn’t make it at all.  First of all the mule-drawn buggy fell apart half way up a hill, causing the whole procession to stop while it was fixed.  Then the trailer got stuck in a giant mud hole, which meant that everyone had to disembark, so the truck could back up and get a good run at it.  To make matters more interesting, both my mother-in-law and father-in-law managed to fall down while climbing off the trailer.  (I really thought I had a good hold of you, Nancy, I swear.  My bad.) 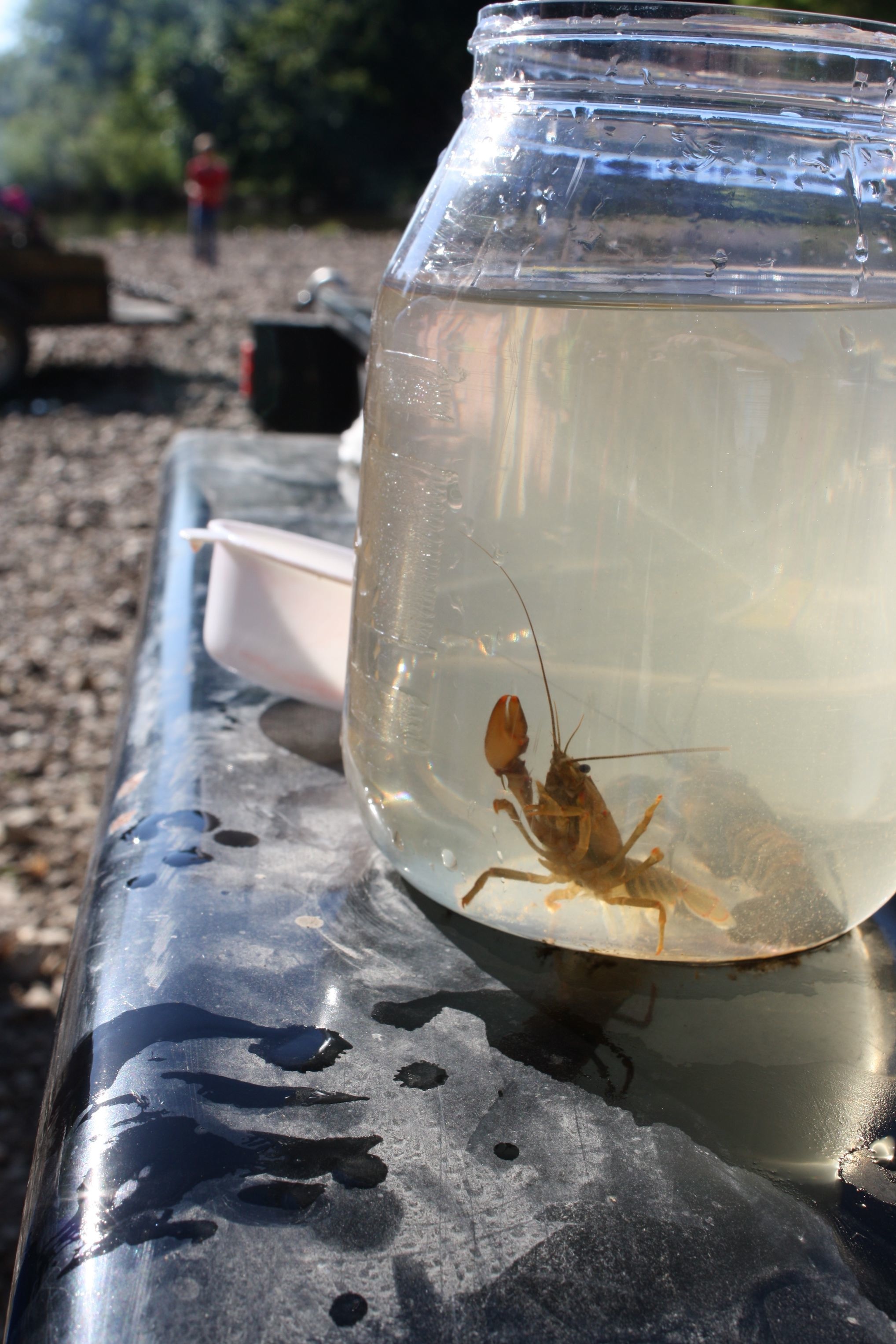 We finally arrived at the creek about an hour and a half after we’d begun.  The children immediately jumped in and got soaking wet, and had a glorious time splashing about.  Hallam had brought an arsenal of improvised fishing equipment with him and went hunting for crawdads.  To his own astonishment, he actually caught quite a few, with the help of another boy, who is probably related to him, although I don’t suppose anyone there could have told you exactly how.

The creek was quite beautiful.  The horses stood peacefully by and drank from the water.  It felt a million miles away from anywhere.  By the time we arrived the horseback riders had set a good fire for the hotdogs.  We settled down on blankets and chairs and began swatting mosquitoes while the food cooked.

I have been part of this family for more than twelve years now, and everyone here  has always treated me with nothing but good-natured generosity and warmth.  I truly feel lucky to have been made so welcome.  Still, I sometimes imagine that I can feel a few curious eyes on my back, as people look at me and wonder what I make of  things.  People may have been doing exactly that on Sunday afternoon.  After all, I’m a city boy at heart.  I lived in London for thirteen years – proper London, mind, Zone 1.  Earl’s Court and Islington.  Not a blade of grass for miles.  A creek bottom in rural Missouri was not my natural habitat.  But I was having a ball.  I watched my daughter joyously flop about in the water and my son cautiously inspect the shallows for signs of aquatic life.  I skimmed stones across the water and got bitten by bugs.  I ate a s’more the size of my fist.  It couldn’t have been much more different from the urban future I had once imagined for myself, and I was grateful for it.  You have no choice but to play the cards you’re dealt; the trick is to relish every hand, no matter how unusual.

We made our way back to the farm in the bed of someone’s pick-up truck – and then slid into Christina’s Prius (the only thing that looked more out of place than I did) for the journey back to Columbia.  The children were wet, filthy, happy and tired.  It had been an afternoon full of laughter, fresh air and old-fashioned country pastimes.  As family traditions go, it looks like a keeper. 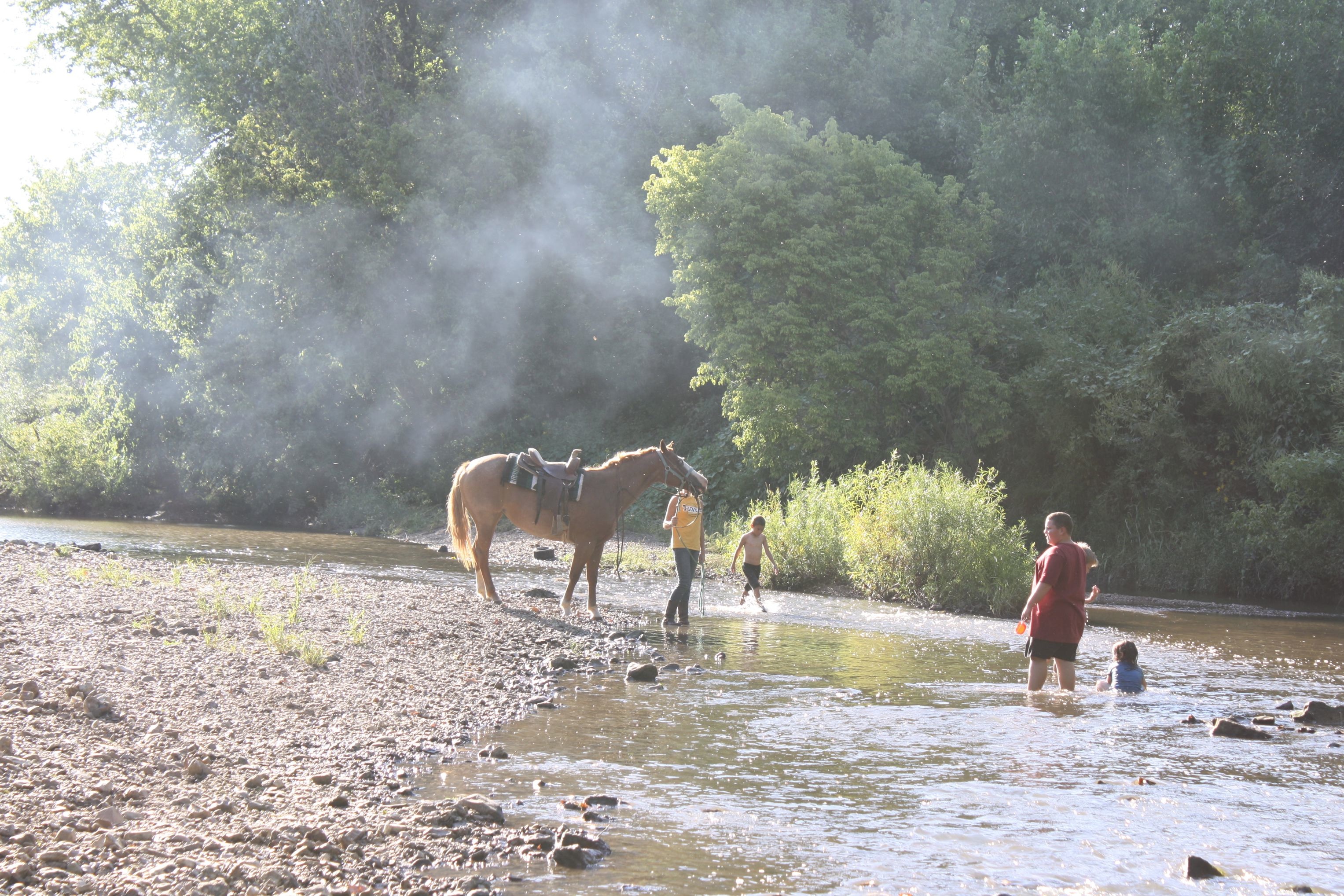