You couldn’t make this stuff up.

A little while ago I dabbled with the idea of a slight name change, reducing myself to a pair of gnomic initials in the manner of Chesterton, G.K., Rowling, J. K., Byatt A.S., and Hartley, J.R.  (inside joke for my English readers with long memories.)  Anyway, that didn’t last too long, and here I am again, plain old Alex.  I’m pleased about this – it is my name, after all.

Imagine my surprise when I came across this: 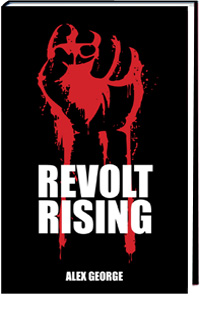 Well, OK, I think.  Fair enough.  I’m not the only person called Alex George.  I know that.  I’m not even the only writer.  There’s an Australian botanist who has published several seminal works about Banksia.  So I didn’t think much about this new guy, until I read the blurb accompanying his book.  Here it is, in all its glory:

“Already frustrated with the socialism that is seeping into their lives, Adam and his wife Allie are forced to deal with a newly-established health care system that threatens to take from them what they cherish the most. In another part of the world, Roy, an army sergeant fed up with the corruption in Washington, is fighting for America’s freedom. At the same time, far away in his ivory tower, the president is fashioning socialist policies that threaten the American way of life. This is the world of Alex George’s “Revolt Rising.” Told in a style that is immediate and heart-wrenching, “Revolt Rising” follows the story of average citizens who are desperately trying to keep their eyes on the American dream. As it seems to pull further away from them, they find themselves raging against the leaders of the very nation they love so dearly. Rage eventually turns to revolt. After banding together with like-minded men, Adam and his army of freedom fighters find themselves in the heart of a battle that will determine America’s future. What will the outcome be? George will keep you guessing (and hoping) to the very last page.”

Perfect.  My namesake is Glen Beck on steroids, drunk, and out looking for a fight.

Those of you who know me will know that I am the living incarnation of namby-pamby liberalism, and proud of it.  But I just wanted to let the rest of you know that, well, just in case this crossed your radar, it wasn’t me.

Thanks to the excerpts that the author has made available on his website, I can report that he is no John Updike.  So at least we have that in common.