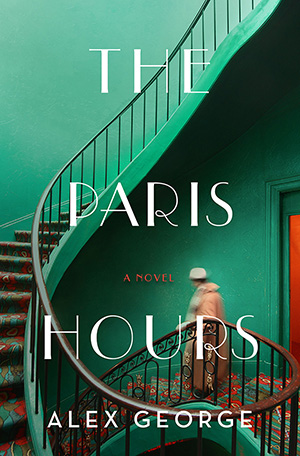 An IndieNext Pick, Book of the Month Club Selection, and Amazon Best Book of Month

“Exquisite… A testimony to the life-changing power of a single day, the book reads like a Jazz Age Les Miserables.”
— Columbia Tribune

“What a design! George expertly crosscuts between various plots, coaxing them closer and closer as evening draws on. The tinder has been set and the fire is lit as the action converges on a raucous cabaret in Montmartre.”

“”What makes this tale work so well?…George knows his way around the world…He writes with a keen edge… [He takes] readers through the streets of Paris—not the Paris that tourists flock to but the Paris that houses real Parisians.”
—St. Louis Post-Dispatch

“The story explores the effects and events of World War I and the magnificence of Paris through the lens of the four characters, and the climax brings their paths together in an exciting read that you won’t be able to put down.”
—CNN.com

“No other recent novel both embraces and transcends its Parisian setting like Alex George’s new book, The Paris Hours… Brims with beauty, music, tragedy, uncertainty, and hope… Resonate[s] deeply.”
—Chicago Review of Books

“Paris between the world wars is the setting for this novel, which unfolds over the course of one day in 1927 and includes a cast of characters such as Camille, the maid of Marcel Proust, a journalist named Jean-Paul, a down-on-his-luck artist named Guillaume who has a meeting with Gertrude Stein, and more.”
—New York Post (A Best Book of the Week)

“Spellbinding…A story steeped in emotion, in yearning, in the desperate wish to change the past, and who among us can’t relate to such a thing?… I raced through the final third, breathless to find out how it would conclude.”
—Veranda Magazine (Book Club pick)

“An artist, a writer, a puppeteer, and an author’s intimate—the stories of these characters move back and forth in a beautiful dance. And how they come together in the final movement is très belle! George has captured the ethos of 1920s Paris.”
—Library Journal (starred review)

Enchanting… Like the film Midnight in Paris… the novel has put us under the spell of the City of Light yet again… Stunning.”
—Booklist

“Engrossing… By evoking fictional characters and historical figures with equal vividness and wisely using repeated motifs, George unites his narratives in a surprising yet wholly convincing denouement. Elegant and evocative, this will have special appeal for lovers of Paris and fans of Paula McLain’s The Paris Wife.”
—Publishers Weekly

“Glittering… Compelling and elegantly written, The Paris Hours is a tribute to love, grief and serendipity in the City of Light.”
—Shelf Awareness

“Atmospheric… George’s Proustian homage to a lost time will be a Francophile’s madeleine.”
—Kirkus

“…this lovely and affecting book… draws readers in and won’t let go until the very end. It is a one-sit read with memorable characters and a glittering setting that will remain with everyone who experiences it for a long time to come.”
—Bookreporter

“The Paris Hours is the kind of book that almost demands to be devoured; it’s hard to avoid being swept away by the journeys undertaken by each of these regular, yet remarkable people. Evocative and smartly-paced, driven by character and historicity, it’s a fantastic read. Bright lights can cast deep shadows; Alex George has undertaken to give us a glimpse of both.”
—The Maine Edge