Let me see… it’s Tuesday, so I should be in London today, having lunch with my agent, Bruce.  Except that I’m still here in Missouri, reading weather reports about unprecedented levels of snowfall that has put England into chaos.  Flights have been grounded across Europe, roads have been blocked, trains halted.  It’s all a terrible mess.  Our flight has been cancelled twice so far. 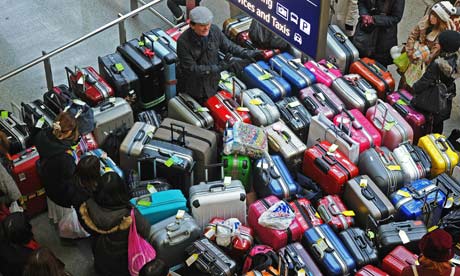 Please, don't let it be me

I usually derive a certain satisfaction from telling my English friends how much more weather we get over here.  And yes, I will admit that on occasion this does descend into out-and-out bragging – you know, the summers are hotter, the winters colder, the rain heavier, the tornados – well, we have tornados.  (Which, lest we forget, was something my wife had somehow forgotten to mention before we moved over here.)  One of the things I enjoyed about Missouri when I first got here was that there are actually four seasons, as opposed to the traditional English two (wet and cold; wet and slightly less cold.)  Now, though, Britain seems to be savaged with weather as extreme as ours.  I can remember snow falling just a handful of times  during my childhood; in the past three years they’ve had more snow there than here.  And people still like to pretend that climate change is a myth.

Of course, the problem is that England isn’t equipped for serious winter weather (which has prompted an outcry and much political hand-wringing.)  Snowfall like this wouldn’t have merited a mention in certain parts of the United States, and business would have carried on without a hitch.  But the Brits, bless their summer-light cotton socks, still aren’t used to it, and consequently the entire country’s infrastructure has ground to a halt.  Which leaves us stranded here, rather than spending some time with my family.  My children haven’t seen their grandparents for ten months; every day is precious.  Sometimes it’s difficult not to be a little bitter.

Still, every snow cloud has a silver lining – on this occasion, two.  Firstly, it looks as if we’ll get out tomorrow.  And secondly, we have spent the last three days here, warm and safe (if bored) at home.  We could have been stranded in some monstrous airport somewhere.  Take your blessings where you find them, I say.  Merry Christmas, everyone.