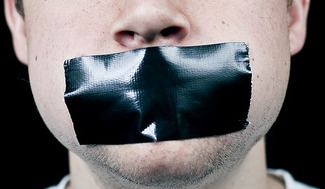 When my first book was published, twelve long years ago, my characters cussed and cursed their way through the unlikely adventures I had concocted for them like drunken sailors on shore leave.  Their conversations were veritable cesspits of fruity idiom.  At the time I thought I was being terribly clever.  I believed that this was what writers did when they wanted to be edgy and interesting.

Of course, I was wrong.  Because of its very ubiquity in everyday life, swearing in novels is usually rather tedious, and just serves to slow down the dialogue.  (It has the added disadvantage, I can attest, of making your mother reluctant to brag about your book to her friends.)

I worked all this out somewhere between books 3 and 4.  I realized that swearing was actually a bit boring, and the expletive count plummeted.  It was liberating, this release from the tyranny of profanity, but also challenging – there was no more camouflaging banal conversations behind a wall of expletives.  I like to think my books improved as a result, though.  My characters still swear, of course – just a lot less than they used to.  They do live in the real world, after all.  (Well, you know, sort of.)

I’m curious to know what other people think about this.  Are you put off by bad language in novels?  Do you even notice?  Are there some words that you will tolerate, and others that you won’t?  And are there particular authors whose use of profanity makes you want to applaud, or throw the book away?  (I always think Philip Roth swears with splendid panache.)

Personally, I’m all for swearing, if done correctly.  Extensive, not to say excessive, use of the vernacular can work beautifully on occasion – I present, as Exhibit A, Derek and Clive.  To further reinforce the point, the clip below is perfect example of how persistent and filthy language can be utterly hilarious.  Maybe it’s just me, but this song gets funnier the more it goes on.  It’s all about context.  Enjoy – but please don’t play this out loud if there are children or easily offended Christians about.