We always had pets growing up.

My childhood can be divided up into a succession of eras defined by the canine presence in my parents’ home.  First there was Sam, who was around before I was.  Then came Benji.  Then Sophy, and now Purdy.  All labradors.  All wonderful, affectionate, loyal and fabulous creatures.

My wife, on the other hand, never had a pet.  Well, that’s not quite true.  Her parents gave her a stone dog once.  And she did have a cow called Paddington – until, that is, Paddington appeared one evening at dinner, and not as a guest, if you catch my drift.  (You’ve heard of urban myths.  This is a rural myth.  Except it’s true.)

Anyway – that whole wonderful, affectionate, loyal and fabulous thing?  My wife doesn’t buy it.  She thinks dogs are smelly, bothersome, hair-shedding nuisances that need to be walked in the rain.

But above all smelly.

This is why, after twelve and a half years of marriage, we have never had a dog, even though we live in the middle of the countryside.

However, for the past month or so, we have – to my astonishment, I will readily admit – had a pet in the home.  (We had fish before, but they don’t count.  Oh, and a hermit crab painted like Old Glory, but that didn’t count, either.)  Here he is: 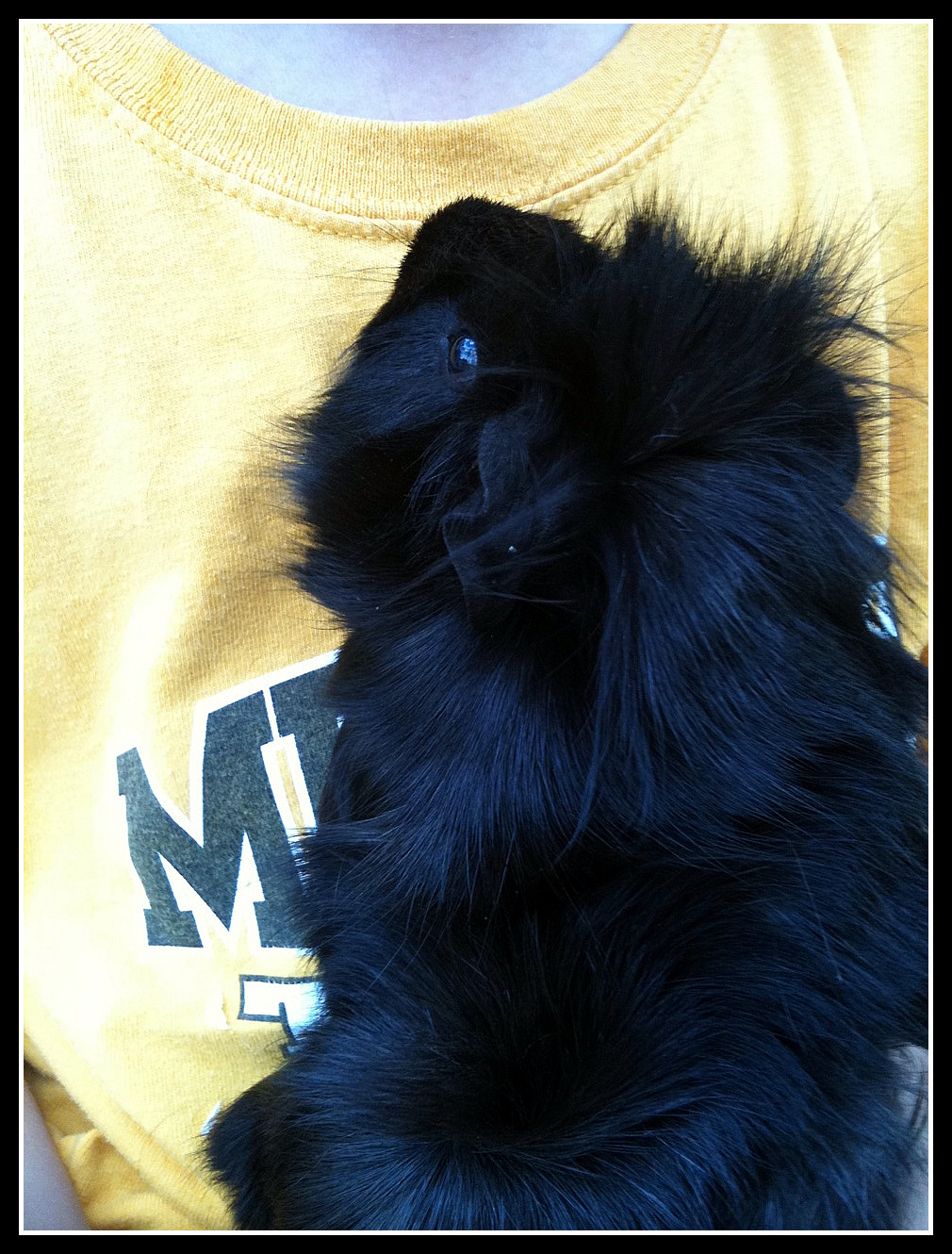 He is a rather sweet guinea pig.

There was, naturally, a debate about what to call him.  I wanted to call him Jonathan Franzen, because I am hugely pretentious and also, you know, just so plugged-in to the literary world.  In the end the children settled on Papa – which is suitably literary in its way, I suppose, although I’ve never been much of a Hemingway fan.  (I know.  Sacrilege, etc.)  Of course, the pig’s name had nothing to do with him.  Papa is actually short for his full name, which is Papa New Guinea Pig.  (This is the sort of geeky geography joke you get when you send your children to Montessori school.)  Rather weirdly, Papa is also what the children call my father.  Oh, imagine the fun we’ll have next time my parents come to stay.

“We need to put Papa back in his cage!”

“Papa’s pooped in the corner again!”

Anyway, Papa is here to stay, and we love him.  Some, it is fair to say, love him more than others.  Hallam loves him more than anyone.  Papa has given our son a whole bunch of new things to worry about – something that he probably didn’t need.  New vistas of worry are opening up before him every day.  These were originally medical – concerns that Papa was not eating/drinking enough, had something caught in his throat, was about to suffer a heart attack, etc.  Recently the emphasis has shifted to more philosophical ground – does Papa love him enough, etc.  It’s difficult to know what to tell him – Papa is, after all, just a guinea pig who squeaks a lot.  We spend a lot of time wondering if they are happy squeaks or sad squeaks.

Anyway, he is a welcome addition to the George household.  Christina seems genuinely fond of him.  I’m watching it all with interest.  I still want a dog.  Papa is the advance guard, sent in to soften that hard heart so that she will soon adore all that is warm and furry (and smelly.)  Well, I can hope.